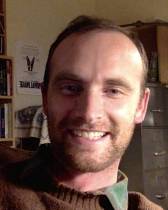 Tristram Wolff (PhD in Comparative Literature, University of California, Berkeley) is an Assistant Professor of English at Northwestern, where he also teaches in the Programs in Comparative Literary Studies and Environmental Policy & Culture. His first book, Against the Uprooted Word: Giving Language Time in Transatlantic Romanticism (Stanford UP, forthcoming 2022), shows how a poetics of naturalized language change in transatlantic romanticism transported the origins of language to an ongoing present, in answer to Enlightenment primitivism. From the “romantic century” (1750-1850) of Wheatley, Blake, Wordsworth, and Thoreau, it retrieves a lost philological chapter in the history of “nature” as a racializing category of humanistic inquiry. His second book, How Not to Feel It: Critical Reading and Affect after Hazlitt shows how Romantic-era writing on the passions, and the historical emergence of the role of the “critic,” have continued to shape contemporary debates about affect and emotion in our habits of critical reading. His essays have appeared in ELH, NLH, PMLA, Essays in Romanticism, European Romantic Review, and Representations. With Lily Gurton-Wachter, he most recently co-edited a special issue of Romantic Circles Praxis Series on “Romantic Poetics of Public Feeling” (2021). At Northwestern, he teaches classes on William Blake, transatlantic romanticism, literary “green worlds,” poetry and geology, and representations of oil and water as extractable resources in fiction and film.