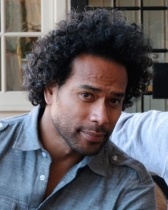 Ivy Wilson (Ph.D. Yale University) teaches courses on the comparative literatures of the black diaspora and U.S. literary studies with a particular emphasis on African American culture. His book, Specters of Democracy: Blackness and the Aesthetics of Nationalism (Oxford UP), interrogates how the figurations and tropes of blackness were used to produce the social equations that regulated the cultural meanings of U.S. citizenship and traces how African American intellectuals manipulated the field of aesthetics as a means to enter into political discourse about the forms of subjectivity and national belonging. Along with articles in ESQ, Arizona Quarterly, and PMLA, his other work in U.S. literary studies includes edited volumes on James Monroe Whitfield, Albery Allson Whitman, Walt Whitman, and on the emergent scholarship in American literary and cultural studies of the “long” nineteenth century. His current research interests focus on the solubility of nationalism in relationship to theories of the diaspora, global economies of culture, and circuits of the super-national and sub-national.

At the Dusk of Dawn: Selected Poetry and Prose of Albery Allson Whitman (editor, UPNe, 2012)

The Works of James M. Whitfield: America and Other Writings by a Nineteenth-Century African American Poet (co-editor, UNC Press, 2011)

Specters of Democracy: Blackness and the Aesthetics of Nationalism (Oxford UP, 2011)
Back to top