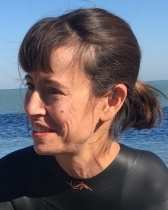 Helen Thompson (B.A. English and Chemistry, Amherst College; M.A. The Writing Seminars, Johns Hopkins University; Ph.D. Duke University) teaches eighteenth-century British and transatlantic literature, philosophy, the history of science, and feminism.  She is the author of two books.  In Ingenuous Subjection:  Power and Compliance in the Eighteenth-Century Domestic Novel (University of Pennsylvania Press, 2005), she argues that eighteenth-century conduct-book authors and domestic novelists critique Lockean social contract theory, which bases the liberality of modern government on citizens’ performance of voluntary or “ingenuous” consent.  By representing wives and female dependents who cannot ingenuously obey their tyrannical husbands and fathers, conduct-books and domestic novels expose a sphere of domestic governance in which power remains arbitrary and its subjects cannot willingly comply.  Thompson’s recent book, Fictional Matter:  Empiricism, Corpuscles, and the Novel (University of Pennsylvania Press, January 2017), explores the formative relations between eighteenth-century British novels and the history of chemistry.  Fictional Matter examines the chemical science of Robert Boyle, Isaac Newton, John Locke, particulate theorists of race John Mitchell and John Arbuthnot, respiratory theorist Stephen Hales, and the founder of modern chemistry Antoine-Laurent Lavoisier to argue that the unit of particulate matter they posit, the corpuscle, produces perceptible qualities—like color—that are not fixed in matter as such.  Instead, the observable qualities and perceived identity of things, including persons, proceed from changeable particulate structure rather than essential elemental units.  Fictional Matter shows the corpuscle’s shaping influence on representation and form in the eighteenth-century British novel.  For leading exemplars including Eliza Haywood, Daniel Defoe, Samuel Richardson, and Henry Fielding, the novel is not a transparent mirror of static objects, but a rendering of the power of bodies to produce perceptible qualities in dynamic relation with other bodies.

As an affiliate of the Gender & Sexuality Studies Program at Northwestern, Thompson teaches a lecture class on second-wave feminism of the 1960s and 70s (GSS 231:  Feminism as Cultural Critique) as well as a class on utopian and dystopian science fiction of the second wave.  In English, she teaches an array of courses in eighteenth-century literature from Boyle to Jane Austen and sometimes beyond.  She was placed on the Associated Student Government Faculty Honor Roll in Spring 2015 and received the E. LeRoy Hall Award for Excellence in Teaching from Weinberg College of Arts and Sciences in Spring 2016.