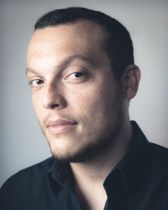 Charif Shanahan (he/him) is a poet and translator. He is the author of Trace Evidence: poems (Tin House, 2023), called “a truly magical achievement” by MacArthur Fellow Ocean Vuong and “an utter revelation” by former United States Poet Laureate Tracy K. Smith; and Into Each Room We Enter without Knowing: poems (SIU Press, 2017), which was a finalist for the Lambda Literary Award for Gay Poetry and the Publishing Triangle's Thom Gunn Award, and winner of the Crab Orchard Series in Poetry First Book Award.

For his poetry, he is the recipient of a National Endowment for the Arts Literature Fellowship; the Wallace Stegner Fellowship at Stanford University; a Fulbright Senior Scholar Grant to Morocco; and residency fellowships from Cave Canem Foundation, Hawthornden Foundation in Como, Italy, MacDowell Colony, La Maison Baldwin in St Paul, France, Millay Colony for the Arts, and the Robert Rauschenberg Foundation, among other awards and recognitions.

As a translator, Shanahan works in the romance languages, primarily Italian. His translations have appeared in Circumference: A Journal of Translation at Columbia University and A Public Space, among other publications, and have been performed by the Vienna Art Orchestra. He is currently completing book-length translations of Corpo presente by Gëzim Hajdari, winner of Italy's Montale Prize for Poetry, and A memoria di mare by Donata Berra.

Originally from the Bronx, Shanahan holds an AB in Comparative Literature and Creative Writing from Princeton University; an AM in Comparative Literature and Literary Translation from Dartmouth College; and an MFA in Poetry from NYU's Graduate Creative Writing Program. He has taught literature, creative writing, and language at California College of the Arts (CCA), Collegio di Milano (Italy), and Stanford University.

In 2023, he is serving as Guest Editor of Poetry Magazine.

Into Each Room We Enter without Knowing  (Southern Illinois University Press, 2017)
Back to top