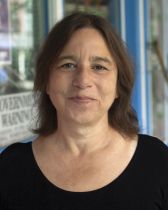 Sarah Schulman teaches Creative Writing (Nonfiction and Fiction) with an emphasis on manuscript development. She is a novelist, playwright, screenwriter, nonfiction writer and AIDS historian.

Sarah is a native New Yorker, born in 1958, who started as a journalist in the grassroots lesbian, gay and feminist press in 1979. That year she became active in the Reproductive Rights Movement, working for abortion rights and against sterilization abuse. Her first plays were produced as part of the Downtown Arts Scene of the 1980's, and her first novel was published in 1984.

In 1986 Sarah and her longtime collaborator Jim Hubbard started MIX:The Queer Experimental Film and Video Festival which lasted for 33 years. She has been a collaborator on many experimental films, including screenwriter or co-screenwriter for 4 features: The Owls (dir. Cheryl Dunye), Mommy Is Coming (dir. Cheryl Dunye), Jason and Shirley (dir. Stephen Winter) and United In Anger: A History of ACT UP (dir. Jim Hubbard.) Her films have shown in Theatrical Distribution and  at The Berlin Film Festival, Hot Docs, Bamfest, The Museum of Modern Art, Outfest, and on the Criterian Collection.

She was a member of ACT UP, New York from 1987 to 1992, and a co-founder of the Lesbian Avengers. Today she serves on the Advisory Board of Jewish Voice for Peace and is co-director of The ACT UP Oral History Project.

In 2002, Sarah became an "Uptown" playwright with the world premiere of her play CARSON McCULLERS (dir. Marion McClinton) followed by MANIC FLIGHT REACTION (w/ Deirdre O'Connell), both at Playwrights Horizons. Her play THE BURNING DECK (w/ Diane Venora) was performed at the La Jolla Playhouse, her adaptation of IB Singer's ENEMIES, A LOVE STORY (w/ Morgan Spector) premiered at the Wilma Theater and THE LADY HAMLET opened at The Provincetown Theater (dir. by David Drake, W/ Jennifer Van Dyck.) Her plays have been developed at The Goodman Theater, The Cleveland Playhouse, The Berkshire Theater Festival, The Vineyard, The Roundabout, and many other theaters.

The Cosmopolitans  (New York: Feminist Press at CUNY, 2016)
"One of the best novels of 2016"- Publishers Weekly

The Gentrification of the Mind: Witness To A Lost Imagination  (Berkeley: University of California Press, 2012)
10 Best Most Unknown Books - Slate, "Best Unrecognized Books" of the year by GalleyCat.

The Ties That Bind: Familial Homophobia and Its Consequences (New York: The New Press, 2009)

The Early Novels of Sarah Schulman: The Sophie Horowitz Story, Girls Visions and Everything, After Delores (Book of the Month Club, Triangle Classics Series, 1997)