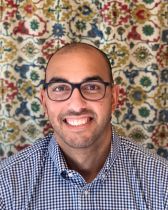 His current project, “Breaking the World: Blackness and Insecurity after the New World Order,” explores the interpenetration of speculative fiction and security policy to understand the underexamined connections between these two seemingly disparate fields of writing.  Bringing works by Octavia Butler, Walter Mosley, Colson Whitehead, and N.K. Jemisin into conversation with security policy and practice, “Breaking the World” argues that that black speculation is an overlooked but essential archive for understanding America’s security ambition since the Reagan Administration.

Justin’s work has appeared in Feminist Theory, Feminist Studies, and Surveillance & Society. His research has been supported by the Huntington Library in Pasadena, CA.