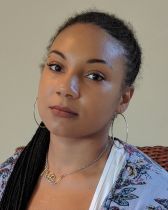 Her first book, White Negroes (Beacon, 2019), is a collection of critical essays on appropriation in popular culture and was long-listed for the Museum of African American History Stone Book Award. She is currently working on another collection of essays, called "Back: An American Tale," forthcoming from Amistad Press, as well as a scholarly project on vertigo and affective disorder in contemporary black literature.

She is a contributing writer to The New Yorker; her other work can be found in The Atlantic, Feminist Media Studies, New York magazine, and the Washington Post, among other places.

White Negroes: When Cornrows Were in Vogue ... and Other Thoughts on Cultural Appropriation (Beacon Press, 2019)
Back to top