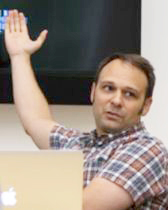 James J. Hodge (he/him/his, Ph.D. University of Chicago) specializes in digital media aesthetics at the intersections of cinema, art history, and literary studies, especially experimental media art genres such as new media art, avant-garde film, and electronic literature. Focusing also on media and critical theory he has special interests in phenomenology and psychoanalysis (object relations). He holds core appointments in English and the Alice Kaplan Institute for the Humanities, and he is affiliate faculty in Art History and Screen Cultures. He received his M.A. from the University of California, Santa Barbara, and B.A. from Oberlin College. Before arriving at Northwestern in 2013 he was a Postdoctoral Associate at Duke University.

His research is devoted to the broad question of how artistic forms express the incoherence of lived experience. His first book Sensations of History: Animation and New Media Art (Minnesota, 2019) argues that animation becomes crucial for understanding the ways in which history changes in the digital age. His current book project, "Ordinary Media: An Aesthetics of Always-On Computing" examines a range of experimental and popular digital artworks in their capacity to express the felt dynamics of always-on computing: from anxiety and sociability to productivity and vulnerability. This and other recent work attend to the explosion of new networked genres such as supercuts, selfies, and animated GIFs, and theorizes them as aesthetic strategies of provisional attunement to the vicissitudes of the historical present.

Hodge regularly collaborates across programs at Northwestern. In July 2021, for the third consecutive year, he will convene a summer institute on the topic of "Media Aesthetics" with Prof. Dilip Gaonkar from Rhetoric and Public Culture and the Center for Global Culture and Communication. In 2018 he co-curated an exhibition of artist and activist Paul Chan's video installation Happiness (finally) after 35,000 years of civilization at the Block Museum with Michael Metzger. In 2016-17 he co-organized a research seminar entitled "Ordinary Media" with Daniel Snelson (now at UCLA).

An interview on his digital pedagogy can be read here.

Areas of Research and Teaching