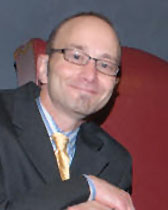 Jay Grossman (Ph.D., University of Pennsylvania) teaches and writes about eighteenth- and nineteenth-century American literature and culture, especially Emerson and Whitman, the history of the book, and the history of sexuality. His book, Reconstituting the American Renaissance: Emerson, Whitman, and the Politics of Representation, was published in Spring 2003 by Duke University Press. He has also co-edited (with Betsy Erkkila), Breaking Bounds: Whitman and American Cultural Studies (Oxford, 1996). For his current work, a cultural biography of the literary critic and political activist F. O. Matthiessen, he has received fellowship support from the ACLS, and in 2002-03 he was a Visiting Scholar at the American Academy of Arts and Sciences in Cambridge, Massachusetts. Four pieces from this biography have appeared in print:  “Queer Contingencies of Canonicity: Dickinson, Whitman, Jewett, Matthiessen” in Whitman & Dickinson: A Colloquy (Iowa, 2017); “’Autobiography Even in the Loose Sense’: F. O. Matthiessen and Melville” in Leviathan: A Journal of Melville Studies (2011); “’Profession of the calamus’: Whitman, Eliot, Matthiessen” in Leaves of Grass: The 150th Anniversary Conference (Nebraska, 2008); and “The Canon in the Closet: Matthiessen’s Whitman, Whitman’s Matthiessen” in American Literature (1998).