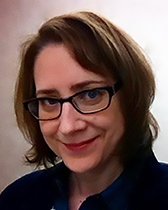 Sheila P. Donohue (she/her/hers) received her M.F.A. from the University of North Carolina at Greensboro, where she was the Randall Jarrell Fellow and served as poetry editor and production manager for The Greensboro Review. She received a Wallace Stegner Fellowship at Stanford University, and subsequently taught there for several years as the Jones Lecturer in Poetry. Her fiction and essays have appeared most recently in Michigan Quarterly Review, The Seneca Review and Poetry magazine. Previous work has been widely published in such places as The Threepenny Review, Prairie Schooner, The New England Review, TriQuarterly, and Epoch. She is a recipient of the Academy of American Poets prize and has received several nominations for a Pushcart Prize. She teaches poetry and fiction in the undergraduate major and in the MFA program, and has twice been elected to the SAG Faculty and Administrator Honor Roll.