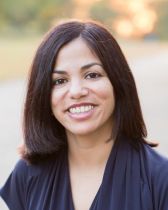 Daisy Hernández is an essayist, memoirist, and journalist. Her work focuses on the intersections of race, ethnicity, immigration, class and sexuality. She is the author of The Kissing Bug: A True Story of a Family, an Insect, and a Nation’s Neglect of a Deadly Disease (Tin House, 2021), which won the PEN/Jean Stein Book Award and was selected as an inaugural title for the National Book Foundation’s Science + Literature Program. The book was named a top 10 nonfiction book of 2021 by Time magazine and was a finalist for the New American Voices Award.

Her memoir A Cup of Water Under My Bed (Beacon Press, 2014) won the IPPY Award for best coming-of-age memoir and Lambda Literary’s Dr. Betty Berzon Emerging Writer Award. The memoir was also a Publishing Triangle Award finalist. She co-edited the anthology Colonize This! Young Women of Color on Today’s Feminism (Seal Press), which was first published in 2002 and has become a widely taught text in women’s and gender studies courses. She coedited a new edition in 2019, and the anthology has been praised by scholars and media outlets for its contribution to understandings of intersectionality.

Professor Hernández’s work has been reprinted in several anthologies including the Best of Brevity: Twenty Groundbreaking Years of Flash Nonfiction. Her essays and fiction have appeared in numerous publications including Aster(ix), Bellingham Review, Brevity, Dogwood, Fourth Genre, Gulf Coast, Iowa Review, and Rumpus, among others. She is a regular contributor to the Buddhist magazine, Tricycle.

A journalist, she has reported for National Geographic, The Atlantic, The New York Times, and Slate, and her writing has been aired on NPR's All Things Considered. Her magazine feature on transgender issues in communities of color was nominated for a GLAAD Media Award.

She has received fellowships from MacDowell, Bread Loaf Writer’s Conference, the Rona Jaffe Foundation, Djerassi Artist-in-Residence, Blue Mountain Center, and Hedgebrook. She currently serves on the board of the Barbara Deming Memorial Fund.

Professor Hernández had taught creative writing at Miami University, Vanderbilt University, Trinity Washington University, and the University of North Carolina at Chapel Hill, where she was the 2015-2016 Kenan Fellow.

The Kissing Bug: A True Story of a Family, an Insect, and a Nation's Neglect of a Deadly Disease  (Tin House, 2021)