Frances Hooper Chair in the Arts and Humanities; Professor of English and Classics 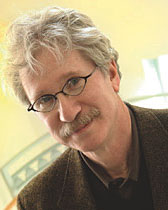 Reginald Gibbons (Ph.D. Stanford, Comparative Literature; AB Princeton, Spanish and Portuguese), is a Frances Hooper Professor of Arts and Humanities. He has published poetry, fiction, translations, literary criticism, creative nonfiction, and book reviews. His novel Sweetbitter, which won the Anisfield-Wolf Book Award in 1995, will be reissued in a new paperback in 2022. His book of poems Creatures of a Day (LSU Press, 2008) was a Finalist for the National Book Award. He has received fellowships from the Guggenheim Foundation, the National Endowment for the Arts, and Harvard's Center for Hellenic Studies (Washington DC), as well as the Folger Shakespeare Library's O. B. Hardison, Jr., Poetry Award. In 2021, he received the Fuller Award for Lifetime Achievement from the Chicago Literary Hall of Fame. Gibbons is a member of the departments of English and Classics, formerly also of the Department of Spanish and Portuguese, and of the Core Faculty of the Comparative Literature Studies Program. He has been the Director of the Northwestern Center for the Writing Arts, and was the founder and Director for many years of the MFA in Prose and Poetry in the Northwestern School of Professional Studies, and then, with colleagues, helped to create the Litowitz Graduate Program in Creative Writing (MFA+MA). His critical book, How Poems Think (Chicago, 2015)), is about the nature of the temperaments of both poet and language, and about rhyme, apophatic poetics, and continuities of poetic thinking over time. His recent books include poetry, Last Lake (Univ. of Chicago Press, 2016); very short fiction, An Orchard in the Street (BOA Editions, 2017); and his eleventh book of poems, Renditions (Four Way Books, 2021). He is at work on poetry, fiction, and translations of Hellenistic Greek poetry. With co-translator Ilya Kutik, he has recently completed volumes of selected poems of Boris Pasternak and Marina Tsvetaeva, and the selected poems of Kutik as well. Gibbons has also published Slow Trains Overhead: Chicago Poems and Stories (Univ. of Chicago Press, 2010), a volume of translations of Sophocles, Selected Poems: Odes and Fragments (Princeton UP, 2008), and other volumes. From 1981 to 1997, he was the editor of TriQuarterly magazine, an international journal of new writing, art and cultural inquiry published at Northwestern; during that time, in addition to general issues of the magazine, he edited special issues of writing from apartheid South Africa, Spain after the end of censorship, Poland during martial law, and the first anthology of Mexican writers translated into English since the anthology edited and translated by Octavio Paz and Samuel Beckett in 1958. Gibbons has edited posthumous editions of the work of William Goyen (for whose literary estate he was executor), including a restored edition of Goyen's first and most remarkable novel, The House of Breath and Goyen's posthumous selected short stories, Had I A Hundred Mouths, as well as other fiction by Goyen, including his previous unpublished second novel, and also edited a posthumous selection of Goyen's essays, notebooks and interviews.  Gibbons also co-founded and for a time edited TriQuarterly Books, which Gibbons also co-founded and for a time edited TriQuarterly Books, which became an imprint for contemporary writing at Northwestern University Press. Gibbons was a member of the Content Leadership Team of the American Writers Museum, which opened in May 2017 at 180 N. Michigan Ave., Chicago. From 1989 till 2018, he served as a board member of the Guild Literary Complex, a Chicago literary presenting organization that he helped found.

Poetry and poetics (both ancient and modern); the translation of poetry; creative writing (poetry and fiction)

An Orchard in the Street (American Readers Series, 2017)

The Poet's Work: 29 Poets on the Origins and Practice of Their Art (University Of Chicago Press, 1989)
Back to top